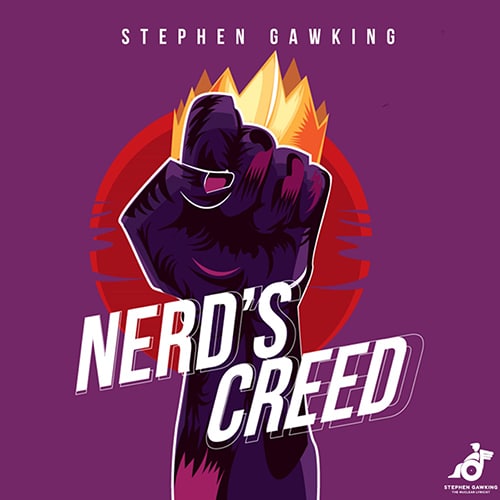 We caught up recently with 27-year-old, Ijay Swanepoel, hailing from Leandra, Mpumalanga’s, who is the brainchild and Creative Director behind Stephen Gawking. We find out a little more about him and his uplifting, socially-cohesive, mainstream, electronic hip-hop project.

You were diagnosed with Spinal Muscular Atrophy at a very young age, which also ties in to the idea behind the name?
My family was told I had SMA when I was around one year old. As I’m sure you can tell, I decided on a play on the name of Stephen Hawking for the project. He had a similar disease called Amyotrophic Lateral Sclerosis, better known as Lou Gehrigs. It manifests in various forms, symptomatically effecting one’s motor neurons, and basically leaving one paralysed. Life expectancy is also known to be reduced, depending on the severity of the condition.

How did your music journey start?
Arend Erasmus introduced me to Bobby Johnson from Re-Birth Music, who I pitched my idea and vision to, and as they say, “the rest is history”.

When was the project founded, and what was the inspiration behind it?
I discovered I didn’t only have a passion for word play and lyricism, but also had a dormant talent as a lyricist. I always played around with words and writing for fun, but never took it seriously until around mid-2018; inspired by Lil Dicky to just go for it, and try doing something different.

Who did you want to speak to, as your audience, when creating the project?
There are so many people and things that are causing division in this world, I wanted Stephen Gawking to be the opposite of that, and bring people of all cultures, backgrounds, and more, together. I wanted the project to be a symbol of hope and inspiration to those who are disabled, different, oppressed, bullied and everyone in-between, really.

Who, apart from yourself, who is Stephen Gawking exactly?
Producer Bobby Johnson and rapper Wurd Smith.

Who would you cite as influences?
Locally, I would say it started with Leon Schuster in the 90s, then Robbie Wessels in the early 2000s, but the most influential local artist for me was Jack Parow, by far. Internationally, it’s from Snoop Dogg, Eminem, Kanye West, Childish Gambino, Tyler the creator, Black Eyed Peas to Kid Cudi. I also have to mention King Los; he is, in my opinion, the best word player/rapper/lyricist in the world at the moment.

What is it about Jack Parow that you find so inspiring?
When he came on to the scene, he was totally something different, not just in terms of him being the first Afrikaans rapper to fully go viral, but his whole attitude of being who he is, and not caring what others think, as long as he is proud of who he is. He doesn’t conform to the norm, and that sparked something inside me, and definitely not just in me; a lot of people can relate. I feel that there is a conformity problem in this world, and especially in SA. For example, if you are an Afrikaans male, you have to be: a farmer, wear khaki clothes, drink brandy, drive a Toyota bakkie, braai 7-days-a-week, and only eat meat; oh, and now, the newest trend is a Jo Black beard (lol). And if you don’t conform to that norm, then you are not really “Afrikaans”.  It’s stupid, and that is why I am a massive fan, as he challenges the norm. You can still be part of your culture without being a copy or clone of your father or grandfather, or even his father before him.

What are your most favourite lyrics ever?
“I’m lost in this beautiful thing, so even in my nightmares I’m still pursuing my dreams”—King Los, Moment for Life.

What sparked your love for music?
I don’t know, there is just something magical about music; probably saved more lives than most doctors.

Favourite song at the moment?
Lil Dicky’s Earth; creativity at its best.

If you weren’t involved with music, what else would you be doing and why?
I would love to produce a TV series, animated or live action film one day. We actually have a comic in the works, called The Missionaries, which has a religious and esoteric theme.

Who would he say is your biggest supporter?
My Mother in everything I do.

What do few know about you?
I’m a cannabis activist. I strongly believe we should legalise it for medical as well as recreational use. Once it’s properly regulated and taxed, I feel it would be a massive boost for the SA economy.

Future plans for the project?
This is just the beginning. We’re working at the moment on the second single, and already have the first album mapped out. Essentially, all that’s needed is funding, which we’re also currently seeking sponsors for, to produce our animated music video. See our Proposal http://tiny.cc/kdh5lz

What is a Blockchain Domain and Should You Buy One?
Get yourself simple, human-readable blockchain domain names with which you can receive all cryptocurrencies, and build censorship-resistant websites that only you can put up and takedown